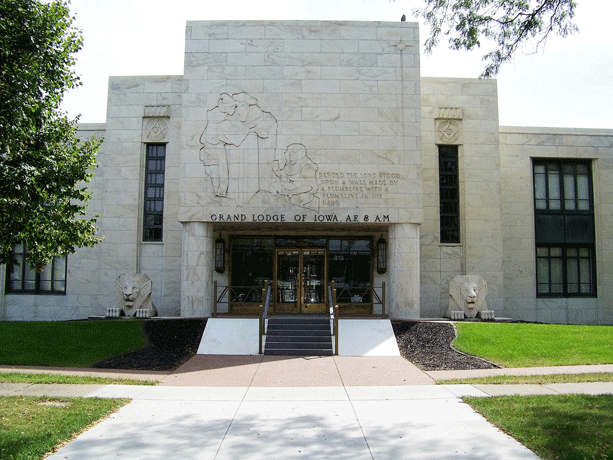 In 1884 the first Masonic library building anywhere in the world was opened to the public in Cedar Rapids, Iowa.  The building was supposed to last one hundred years, but nobody predicted the impact a building would have on the collections which grew so quickly that the building housing them proved too small and crowded.  Thus, in 1952, the old library was demolished and the current marble building opened on the same site in 1955.

Today the Iowa Masonic Library and Museum is regarded as one of the best facilities in the world to perform Masonic research.  The Library houses over 250,000 volumes of which thousands are rare Masonic books for the serious researcher, and a circulating collection for the casual reader.  The Library also collects materials dealing with non-Masonic topics.  The Iowa collection contains materials dealing with Iowa history, government, education, social history, religion, etc.  In addition the Library boasts a number of volumes on spirituality, religion, philosophy, history, literature, and biography.  Included are several special collections including: A.E. Waite Collection of esoteric and occult science, Dr. Arthur W. Erskine Collection of original papers and materials in the field of X-ray technology, Joseph A. Walkes Collection of Prince Hall Masonry and the Harvey Collection of Landscape Architecture.

The library building also contains several museums. The Library’s Masonic Museum houses Masonic decorative arts, regalia, equipment, artifacts, medallions and jewels from around the world, a collection of Lincoln memorabilia, and a civil war battle flag. There is also a three-paneled painting entitled, “The First Three Degrees of Freemasonry” the only known Masonic painting of Iowa artist Grant Wood, a member of Mount Hermon Lodge No. 263 of Cedar Rapids. The General Museum houses thousands of artifacts dealing with general history.  From Babylonian tablets and ancient Egyptian tomb art to historic military items and pioneer collections. Other highlights include Native American antiquities, Japanese samurai armor, decorative arts, and wood carvings by local Czech folk artist John J. Stodola. The Swab Room contains a collection of porcelains, statuettes, vases, jewelry and other fine art from around the world collected in the early 20th century.

An admirable project of the Grand Lodge was the creation of a Committee on Military and Naval Masonic Activity which was to render service to brethren and sons of brethren in the armed forces. The resolution was introduced by Past Master Charles C. Clark at the Annual Communication in June 1941. Funds for the committee's work were to be provided by voluntary contributions. The committee lost no time in becoming active and in a letter to each lodge on February 7, 1942, made its first report. On August 26, 1942, the then Grand Master, Ford L. Van Hoesen, asked for a contribution of twenty-five cents from each member. This request was repeated for the next five years, being discontinued after January l, 1947. By a request of the committee in June 1943, the funds available to the committee were to be allotted as follows: 40 %, to the Masonic Service Association; 40 % to rehabilitation, and 20 % to Iowa's program of service. In June 1946, Grand Master William L. Perkins recommended to the Grand Lodge that a portion of the money from these contributions be set aside to erect a war memorial as a part of the new Grand Lodge Library building which was now in the early planning stages. His recommendation was adopted. Surplus funds of the committee were invested in government bonds, and when construction of the new building was started in 1953 the bonds were cashed and the sum of $47,435.00 was available. This made possible the exquisite memorial hall with a roster of lodge members who served during the war.

The carpet in the War Memorial room is made of Australian wool shipped to Puerto Rico, dyed, woven into the rug and then sheared to leave the Masonic emblem outstanding.

The hour-glass is an emblem of mortality and refers to the passage of time from which none can escape.

At the east end of the room hangs the painting "Victorious Peace" by Edwin J. Bruns of Cedar Rapids, the gift of Burdette Lackman of Burns Lodge No. 173 of Monticello.

The center window denotes patriotism and dedication to our country as well and the ever-burning flame, an emblem of eternity.

Painted by Edwin Bruns in 1956 displayed in the "War Memorial Room" This painting denotes the sense of well being and prosperity that had returned to the world and America in particular as well as Freemasonry.

The artwork depicted in this frame is a square and compass, the symbol for the Blue Lodge of Masonry. It is made entirely of matching blue, yellow and tan iridescent butterfly wings. The picture is dated 1918 and belongs to Trinity Lodge No. 208 in Davenport, Iowa. The original owners were Roy and Anna Appleby. It was returned to Iowa from California in 2001 by Mrs. Dale McClure.

James Stevenson, a geologist with the United States Geological Survey and the Bureau of American Ethnology, collected many of the pieces in this exhibit case. These artifacts were then given to Theodore S. Parvin and subsequently donated to the Iowa Masonic Library about 1894. James Stevenson also made extensive ethnological collections for the Smithsonian Institution. Stevenson died in 1888. The black on black pottery in the upper portion of the exhibit contains signed pieces by Maria Martinez from the 1920s.

Books Especially for the New Mason

The Iowa Masonic Library uses Companion Software’s Alexandria Librarian for its online catalog. Alexandria’s Researcher is the library gateway. For information about using the catalog click here Alexandria Help Follow this link to Alexandria Researcher With Researcher you can search the catalog by Author, Title, Series, Subject or Key Word 3 Rules to create more …